Some of the most memorable public art at Kresge College can be found at its Town Hall on the north end of the college. Here you will encounter the notorious “Kresge College Naked Man” sculpture hanging from an outside wall, and dozens of unframed silk-screened images commemorating the many musical groups and speakers who have graced the Town Hall stage, from the Talking Heads to Daniel Ellsberg, famous for leaking the Pentagon Papers to the New York Times and other publications.

Though the campus currently plans to demolish Town Hall and rebuild an updated version on the southern end of Kresge, the public art will be preserved and retained. The silk-screened images will be moved to the new Town Hall, while the location of the Naked Guy has yet to be determined.

Like all other aspects of Kresge, the Kresge College Naked Man and the silk-screen images have a long and surprising history.

The Naked Man looks as though he’s attempting to scale the outside of Town Hall while showing full-frontal nudity to all passersby. He dangles one dainty foot above the drop, while barely touching the building with the toes of his other foot. It looks like he might tumble off the wall any moment.

That is exactly what happened on September 23, 2013, when the Naked Man plunged from his perch the weekend before classes began. After his fall, the Naked Man—who is long and slender, with outstretched arms and a burnished brick-red color—damaged his foot and several fingers.

“We thought it was metal,” recalled Kresge programs coordinator Pam Ackerman. “But it hit the ground and revealed fibers!”

After the Naked Man crashed to the ground—the rope that anchored the artwork to the exterior of Town Hall broke—the Kresge community realized that the sculpture was a mystery.

“In an attempt to get him repaired, we gathered some interesting facts,” said Ackerman.

The sculpture, reproduced in countless T-shirts and Kresge fliers, dates back to 1974—the early years of Kresge—when it was part of an outdoor art show. It is made entirely of fiberglass, the stuff of surfboards. Its real title is “The Climber,” and “it is considered a significant piece of California post-war art,” Ackerman noted. It is part of an art world movement called “the Birth of Cool,” encompassing artworks made from “new” and cheaper building materials resulting from the post-World War II technology boom and the industrial boom.

The artist was a well-known San Francisco Bay Area sculptor and muralist named Robert Boardman Howard (1896–1983), who grew up in Berkeley. Ansel Adams once took a picture of him in 1945. He added his artistic touches to many public works projects, including a fierce, molded cement falcon at San Francisco’s Coit Tower. You can also see some of his beautiful paintings of deer, flowers, and native plants at the Mural Room at Yosemite National Park’s Majestic Yosemite Hotel (formerly the Ahwahnee Hotel).

To this day, the sculpture draws strong reactions among students, who somehow clamber up the Town Hall exterior wall to put clothing on the statue, including lingerie. It is unclear how they get up there.

“They must bring their own ladders,” Ackerman marveled.

Though the statue has many fans, it also has a few stern detractors. During one move-in weekend, “a parent wasn’t too happy,” Ackerman recalled. “He wanted to put a pair of underwear on the Naked Guy!”

The colorful tiles of Town Hall

These photo-realistic and mysterious images are so much a part of Kresge’s past and identity that many visitors barely notice them. But each of these paintings tells a story about a performance, a lecture, a galvanizing rally, or speech from long ago.

Some are names you will recognize right away, including the Talking Heads, which played one of its earliest West Coast gigs at the Town Hall in 1977, and blues legend John Lee Hooker. Others will force you to stretch your memory a little bit, including the Screaming Memes, the musical group Sukay, and a gay improv troupe called the Afro Homos.

The paintings are a rainbow of colors. The singer-songwriter Tom Paxton is a creamy shade of green, author Terry McMillan is deep purple, the late legendary Santa Cruz saw player Tom Scribner is beige, rock star Greg Kihn is pale tangerine, and beloved poet Adrienne Rich is somewhere between pink and orange.

Like so much of Kresge, these startlingly life-like images have a surprising history and identity. Though they look silk-screened, they were painted by hand, painstakingly, by several artists working in the 1970s and 1980s. One of those artists was Jim Urban, who is also responsible for the impressive hand-painted event announcements on the barn near the base of the UC Santa Cruz campus.

The artists painted each image on a sound-absorbing acoustic tile, consisting of a piece of plywood and some foam with canvas on the front. The tiles were meant to “tone down a lot of the hard echoes” of Town Hall. It is no secret on campus that this venue, beloved though it may be, was pretty terrible in terms of sound quality.

“That place is just one hard angle after another, and that affects the sound,” Urban continued. “I don’t know if painting over the tiles made that worse or better but they look cool.”

How did the artists make the images so realistic? Urban would put a photograph of the performer or speaker on a transparency, and do a rough sketch of the image, using the projection to guide his hand. He’s especially proud of his painting of legendary NPR correspondent Nina Totenberg, which he rendered in small dots, “like a blown-up newspaper image. It was a pain to paint, but it turned out pretty well.” The late Dith Pran, a daring Cambodian photographer whose real-life story was featured in the movie The Killing Fields, smiles through turquoise streaks that look like a rainstorm.

Here is one more fascinating fact about the Town Hall images: the stark black-and-white picture of the seminal rock band the Talking Heads, with bold red lettering, is a replacement.

“Someone stole the original,” notes Ackerman. “Town Hall didn’t used to be locked and someone walked away with it. Go figure!”

The Town Hall paintings will be preserved, but it is unclear where they will wind up on display.

Speaking of public art at Kresge: Not far from Town Hall, students walk past a group of blocky, yellow, smiley-face planters that look a bit like Lego character heads. But did you know that those painted designs started off as graffiti? Some mischievous student did the painting, apparently as a joke, but undergraduates liked the look of it, and the “Lego Planters” have been preserved. 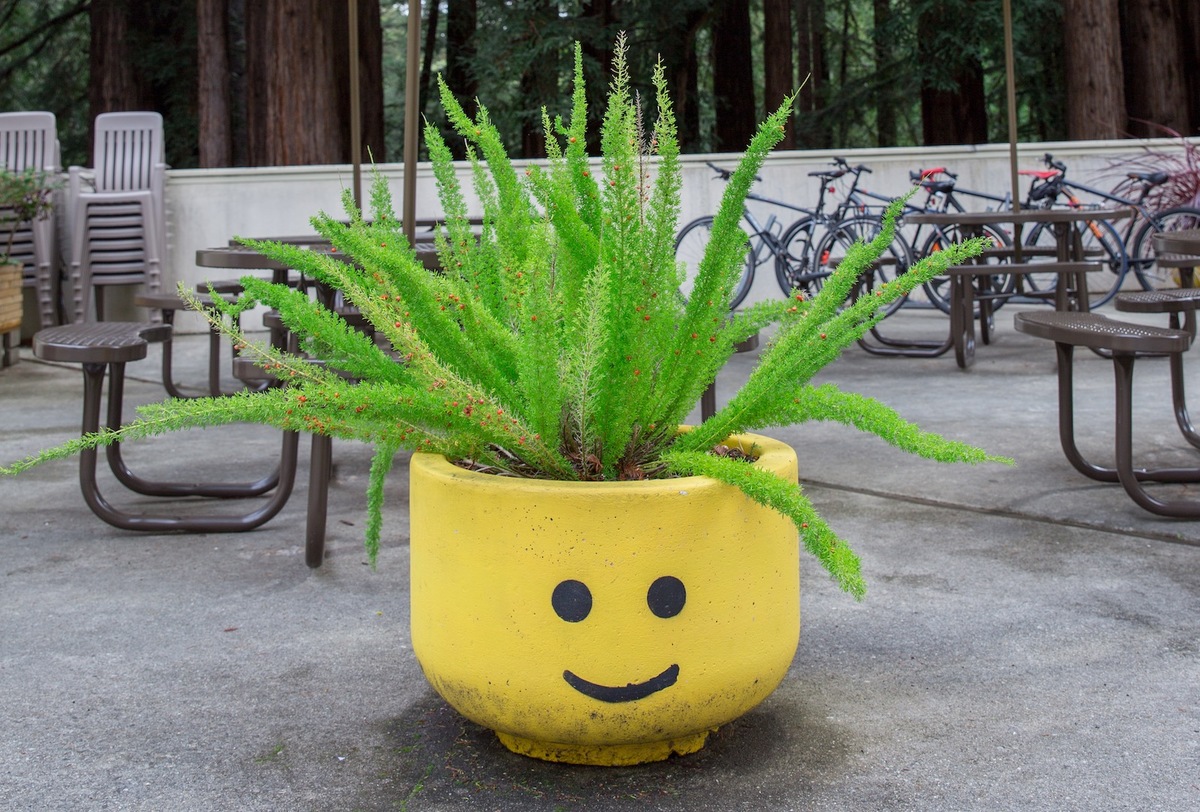