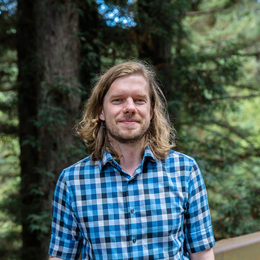 Ryan Foley, assistant professor of astronomy and astrophysics at UC Santa Cruz and principal investigator of the 1M2H Collaboration. (Photo by C. Lagattuta) 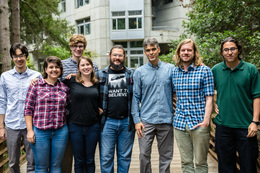 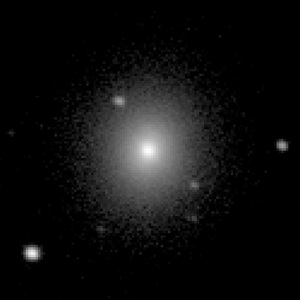 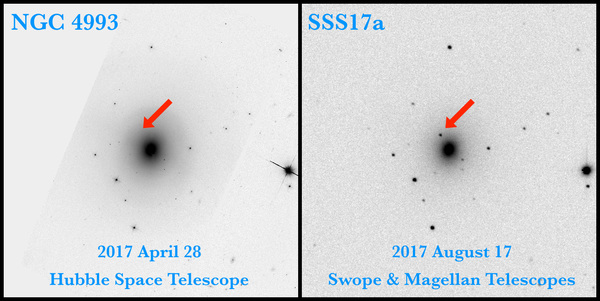 Observations of SSS17a by Foley’s team, using the Swope and Magellan Telescopes at Las Campanas Observatory, showed it getting very bright, very quickly, then fading rapidly over the next few days, changing from blue (left image, taken on the first night) to red (right image, taken four days later) as it cooled. By about 7 days after it was first detected, the source could no longer be detected in visible light. (Image credit: 1M2H Team/UC Santa Cruz & Carnegie Observatories/Ryan Foley) 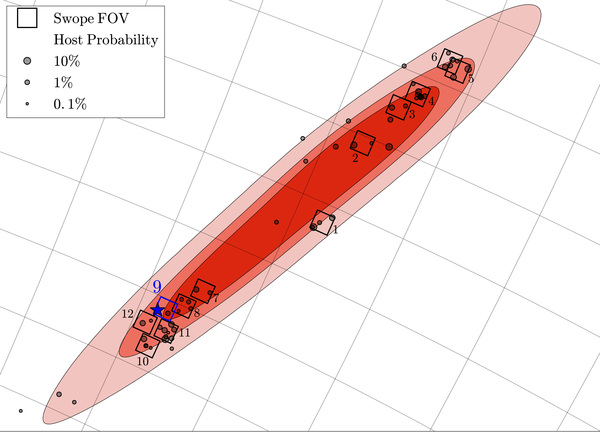 UC Santa Cruz astronomers searched for the gravitational wave source in an area of the sky indicated by LIGO (shades from pink to red indicate different levels of confidence). They found the source in the galaxy N4993 in the ninth field of view (FOV) they observed with the Swope Telescope, as indicated by the blue square. Galaxies are represented by circles (sized according to probability of hosting the source). (Image credit: 1M2H Team/UC Santa Cruz & Carnegie Observatories/Ryan Foley) 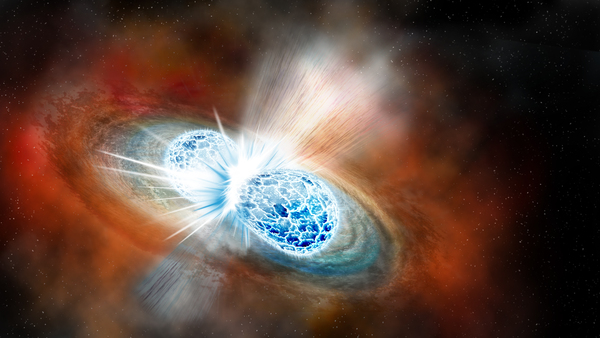 The merger of two neutron stars on August 17, 2017, generated gravitational waves detected by LIGO and a bright kilonova observed by UC Santa Cruz astronomers and others. The merger drove the synthesis of heavy elements such as gold and platinum, and UCSC researchers calculate that neutron star mergers can account for about half of all the elements heavier than iron in the universe. (Credit: Illustration by Robin Dienel courtesy of the Carnegie Institution for Science) 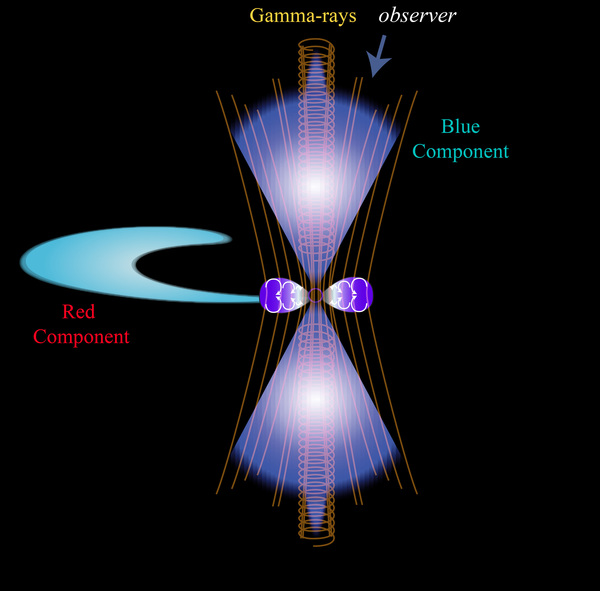 The violent merger of two neutron stars is thought to involve three main energy-transfer processes, shown in this diagram, that give rise to the different types of radiation seen by astronomers, including a gamma-ray burst and a kilonova explosion seen in visible light. As the two stars spiral toward one another and merge to form a “hyper-massive” neutron star, a small fraction of the matter is ejected in a tidal tail (labeled “red component” in the diagram). The merger generates a short gamma-ray burst resulting from twin jets of material moving out from the rotational poles of the merger at close to the speed of light, likely triggered after the collapse of the remnant onto a black hole. In addition, an intense outflow of neutrinos from the hyper-massive neutron star drives a wind of material moving at about one-tenth the speed of light (labeled “blue component” in the diagram). The blue and red wavelengths that dominate the light from the kilonova at different stages result from different elements in the ejected material, which is heated by radioactive decay processes. (Image credit: Murguia-Berthier et al., Science) 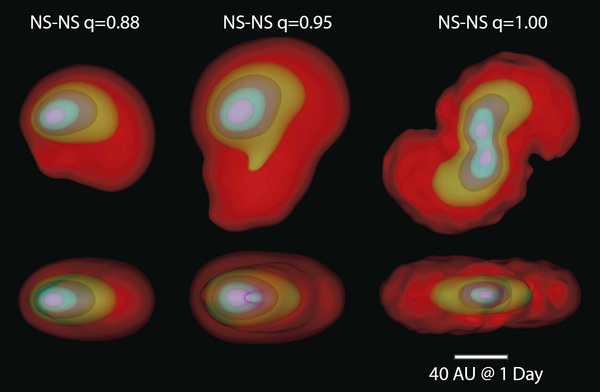 Material ejected during the merger of two neutron stars is thought to give rise to the visible light seen as a kilonova. The structure of the ejected material is shown in these snapshots from computer simulations, which show the ejecta close to the time when the kilonova emission is produced and at two different orientations (orbital plane on the bottom, perpendicular to the orbital plane on top). The structure of the ejecta depends on the relative masses of the merging objects, with two neutron stars of equal mass shown on the far right. For the merger observed on August 17 (SSS17a), calculations predict a mass ratio close to 0.8. (Image credit: E. Ramirez-Ruiz)

The 1M2H Collaboration made the first ever observations of a visible event linked to the detection of gravitational waves. The team captured the first images of the merger of two neutron stars with the 1-meter Swope Telescope at the Carnegie Institution’s Las Campanas Observatory in Chile. (Credit: 1M2H Team/UC Santa Cruz & Carnegie Observatories/Ryan Foley)

The search strategy of the 1M2H team involved prioritizing the galaxies within the search field indicated by the LIGO team, targeting those most likely to harbor binary pairs of neutron stars, and getting as many of those galaxies as possible into each field of view. The team found the source in the ninth field they observed, after waiting 10 hours for the sun to set in Chile. (Credit: 1M2H Team/UC Santa Cruz & Carnegie Observatories/Ryan Foley)

The merger of two neutron stars, seen in this computer simulation, drives the synthesis of heavy elements such as gold and platinum, and UCSC researchers calculate that neutron star mergers can account for about half of all the elements heavier than iron in the universe. (Credit: S. Rosswog, E. Ramirez-Ruiz)

A short gamma-ray burst was detected by the Fermi Gamma-ray Space Telescope two seconds after LIGO detected gravitational waves from colliding neutron stars. A gamma-ray burst is one of the most powerful explosions in the universe. The emission comes from a jet moving at velocities near the speed of light. This video shows how the jet can propagate through the neutrino-driven wind from the merger of two neutron stars. It is a density plot, where green is more dense and the jet is shown in red.

Theoretical calculation of the blue and the red light from a kilonova, compared to observational data for the transient SSS17a associated with GW170817. The data agrees with theoretical predictions that the blue light should fade quickly over days, but that red light should persist for weeks after the merger. The right panel shows an illustration of the expanding radioactive debris cloud ejected from a neutron star merger that gives rise to the light. Lighter elements in the outer polar regions give rise to quickly fading blue light. Heavier elements in a surrounding donut and spherical core produce longer lasting red light.